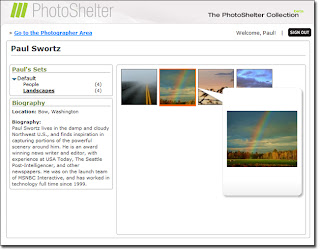 A new stock photography site went live on Nov. 12 ... with any luck, editors and designers the world over will demonstrate their excellent taste and license my work.

The PhotoShelter Collection aims to be different than other stock sites (I haven't any experience as a buyer or a seller, so I haven't any baseline).

All photos have to pass muster by editors, which means the prices are higher than some other stock sites, but the quality of images, keywording, etc., should be better as well.

My page is located at http://my.photoshelter.com/honuphoto

Posted by Paul Swortz at 9:26 AM No comments:

Shooting the President ... With a Camera! Bill Clinton Listening
Originally uploaded by Honu Photo
This was my favorite, but the other three I've posted are OK too.

Bill Clinton was in Seattle for a recent conference by U.S> mayors on global warming. He's also promoting a new book on charitable donations called "Giving," and his visit coincided with the end of my company's annual Giving campaign.

Side note about my amazing company:
Microsoft matches employee contributions up to $12,000 per employee , per year. In addition (and I really love this) when I donate my time as a volunteer or board member for a non-profit, they "match" my time contribution at the rate of $17/hour. Amazing. This year's total (employee donations + matches): $72 Million (USD).

Anyway ... I got to the location where President Clinton was going to be speaking about 2 hours early, and secured a front-row seat (to his right) for the event.

Getting its first real test was my SB-800 speedlight. The ceiling was rather high, but it looked like I was getting better shots when I used the diffuser and bounced.

After the event, I was wishing I had used more direct flash, as I was about 20 feet away.

Posted by Paul Swortz at 4:43 AM No comments: