Concept to reality in about four months PART 1:
After my first visit in December 2007 to the grounds of the old Northern State Hospital near Sedro-Woolley, Washington, I was struck by how amazing the contrast would in a series of shots with a pretty, young woman in this decaying, abused, and dying setting.

Initial selections from the shoot A series of fateful coincidences occurred to make the shoot -- done on Sunday, 18 May -- a reality. We finished late on Sunday, and it's going to take me a few days to go through the shots (599 frames initially short-listed to 207 ...). 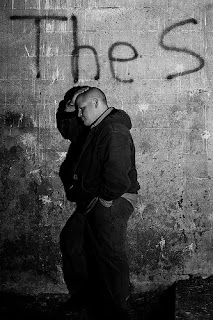 First -- I made the acquaintance of a fellow photographer -- Jan Klier -- at the location during my second scouting trip. This time, I invited shooters from my photo club at work and from my amazing Seattle Flickr Meetup group on Flickr.

It was clear from the outset that Jan saw the potential of the place, and he and I stayed late, trying different lighting setups all over the grounds of the abandoned dairy (here's my favorite - a shot of me taken by Jan). He also had the technical lighting skills I am only now starting to acquire, and has been generous sharing his learning with me.

Second -- I learned that one of my favorite baristas, Kymi Jo, -- pretty, clever, with a great sense of humor -- had experience as a child model. I mentioned the asylum concept to her, and she was immediately eager to pose.

That was in February.

Developing the Concept
The more I thought about the shoot, I began to realize it needed to be a little more edgy. I thought about the dirt and the graffiti and the litter, and considered what else could enhance Kymi's natural freshness and beauty ...

Pure, white, delicate and clean ... the opposite of these old structures.

Talked over the idea with Jan and started searching Flickr and other sites for images of wedding dresses ... found a reference to a site called "Trash the Dress" that had some similar bridal shots in contrasting environments.

The Dress
So, inspired by the location and by Kymi, I needed to find a dress. A size 2. That would fit within my meager budget.

Started scouring Craigslist and posting around. I stopped in every thrift store between Mount Vernon and Bellevue almost weekly.

Even asked my Flickr friends about a dress ... ( and now a group are heading to the asylum soon to do a group event ... I am certain to be humbled, as always, by their results).

I found lots of dresses -- but in the size 12 -14 size range -- rarely anything smaller (not sure what to make of that observation, but there's a photo story in there I think).

Then, a week ago, as I was giving up hope and considering a Plan B (hospital scrubs maybe?) I found THE DRESS. A beautiful satin skirted, lace sleeve and neck ... and Kymi's size.